What exactly is OG Salsa you ask? If you’re from LA I don’t think I need to define, but if you’re from elsewhere Urban Dictionary does a pretty decent job defining OG.

Remember in my last post when I declared that He (from she cooks, he eats) makes the best tacos on earth and if I had to pick a last meal, that would be it. One of the reasons why I love those tacos is because of the equally delicious salsa that he makes with them!  Being an avid supporter of she cooks, he eats, he was sweet enough to share his now not-so-secret infamous salsa recipe.

So let’s get started! First roast the peppers, tomatoes, and garlic…

roast garlic cloves on a pan

Roasting the peppers, tomatoes, and garlic will take a while…

don't be a nit-picker like me...it's the bad way to roast a tomato, patience is key!

correct way to roast a tomato, he has patience :)

the garlic. taking it's sweet time to roast...

however...the peppers are done! you want them to get nice and dark on all sides

Once all the peppers, tomatoes, and garlic cloves are roasted, put in a plastic bag…

Wait a few minutes and remove the skin of peppers, tomatoes, and squeeze the garlic out of the cloves. Next you will have to…

mash the tomatoes in a bowl

de-seed the peppers and dice them up

Since you’re dicing up the peppers, you mind as well dice up an onion!

he dices because she sheds tears very very easily

ooo la la nicely diced and no tears for me :)

Put the peppers, onions, and garlic in the bowl of tomatoes and…

mash it all together!

Lastly season with salt/pepper to taste and squeeze in some lemon juice….

chill in the fridge for at least 10 minutes prior to serving, but not too long because it can get soggy

fun behind the scenes fact: he eats a lemon (rind included) while she cringes and makes funny faces at him :)

Hope you all enjoy it as much as I do! What are some of your favorite homemade salsa recipes?

24 thoughts on “party in your mouth salsa”

My Tweets
Follow she cooks, he eats on WordPress.com 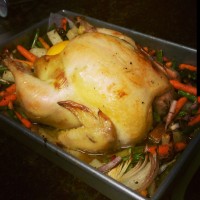 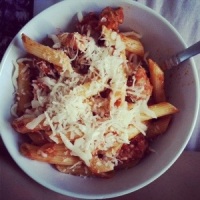 © she cooks, he eats, 2011-2014. Unauthorized use and/or duplication of this material without express and written permission from this blog’s author and/or owner is strictly prohibited. Excerpts and links may be used upon request, provided that full and clear credit is given to she cooks, he eats with appropriate and specific direction to the original content.
%d bloggers like this: